In the last few weeks the train has featured heavily in my travelling agenda and that generally means keeping an eye on the time. It’s not that I am overly concerned with punctuality you understand, just amazed by the complex and often heavily interlinked timetabling of railways, that and a secret obsession with station clocks. Indeed it is difficult to think about trains without thinking about time and how when we enter a station we are constantly checking watches and looking up at clocks. It is maybe then we realize how important the standardization of time is to the running of a railway and our busy lives.

It wasn’t always the case, ‘railway time’ as it came to be known was a revelation in its day with the standardized time arrangement first applied by the Great Western Railway in England in November, 1840. This was the first occasion when different local times were synchronized and a single standard time applied. Over the next couple of years Railway time was taken up by all railway companies in Great Britain. The schedules by which trains were organised and the times station clocks displayed was brought in line with the local time for London or ‘London Time’, which was already widely known as Greenwich Mean Time (GMT). 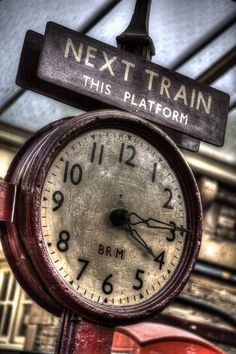 It wasn’t an easy introduction and the railway companies faced much resistance from local people who refused to adjust their public clocks to bring them into line with London Time. As a consequence two different times would be displayed in the town and in general use, with the station clocks and the times published in train timetables differing by several minutes from that on other clocks.

However, it prevailed, as despite this early reluctance, it avoided the confusion caused by having non-uniform local times in each town and station stops along the expanding railway network and helped to reduce the incidence of accidents and near misses, which were becoming more frequent as the number of train journeys increased.

As the key rail networks developed in North America, India, and in Europe throughout the latter 19th century the introduction of standard time went with it and by the 1900s most European rail networks had adopted the system. This standardization saw the rapid development of synchronized timetabling and with it the growth of international rail travel. Not to mention the opportunity to look at more exotic clocks and argue as to who has the most punctual trains.