A ride on The Flying Scotsman

An email flashed up on a grey day in October 2015 announcing the up and coming completion of the 10 year re-fit of the world famous steam locomotive The Flying Scotsman.  One of its first tours of duty would be on the North Yorkshire Moors Railway (NYMR).

This is something I had to witness. I, being from a generation old enough to have known steam locomotives before their demise in the 1960’s had all the DNA necessary. Luckily my wife, Suzanne, whilst not having the boyhood drive, does have the nostalgic passion to be fully supportive.

So as our colleagues at Forbo Flooring Ripley know, we are partial to a visit to the North Yorkshire Moors and with this I booked the first available seats, on the first day of the tour at 09:30am, Saturday 12th March 2016.

Eventually the weekend arrived with all the trepidation of the crowds and mayhem reported in the press from its inaugural run from Kings Cross to York a few weeks earlier. But to circumnavigate the crowds, a venture over the moors the day before saw the tell-tale sign of steam as they were “gauging” the engine over the 18 mile tracks of the NYMR in preparation for the following day. A quick detour to Grosmont station saw a handful of equally expectant viewers. And soon it came to pass, a quiet and dignified meeting with the fine lady, The Flying Scotsman as she came into the station and then on to her shed for the night ready for the big day. This gave us opportunity to get close without the thousands that would soon be clambering for a look and to snap some photos over the following days.

The main day itself started early, arriving at 07:30 to ensure parking and access and at 09:00 she arrived off shed to couple to her carriages accompanied by the wailing of two pipers playing the Highland fling.

The crowds, missing from the day before, now added to the great experience and anticipation with glee on everyone’s face – young to old. A chat with the fireman, a young lad from Yorkshire trained at the NYMR and given the task to fire the Scotsman for this day who was equally excited and felt privileged, and this yielded a souvenir piece of coal from the footplate of the great lady. A piece of coal might not seem much of a prize to most but imagine, this is the fuel for the most famous steam engine in the world taken from the very brink of her fire ! 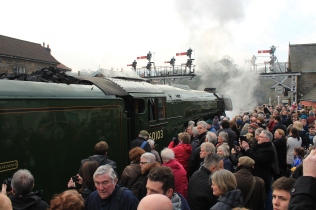 Our booked run on her through to Pickering up the challenging 1 in 49 “hill” to Goathland was smooth and strong remembering she is still being run in on these unfamiliar tracks and gradients. Passing fields and every fence vantage point littered with waving onlookers and photographers,  was an amazing experience.

The coaches used on the NYMR are a mixture of rolling stock from pre to post war eras. The NYMR is also home to the LNER Coach Association who restore LNER Teak coaches from the 1930’s . These again add to the nostalgic element of the plush traveling times of that evocative art deco era.

After the return journey from Pickering there was time to make a final excursion on foot to a vantage point along the line and in the fields at Esk Valley. Some video and distant long shots were grabbed of her doing a second journey from Grosmont in order to catch her in full traction. It was an exhilarating experience all round and a pleasure to see this reflected by all those who traveled on the sell-out runs and to those who simply waited to see this great engine. 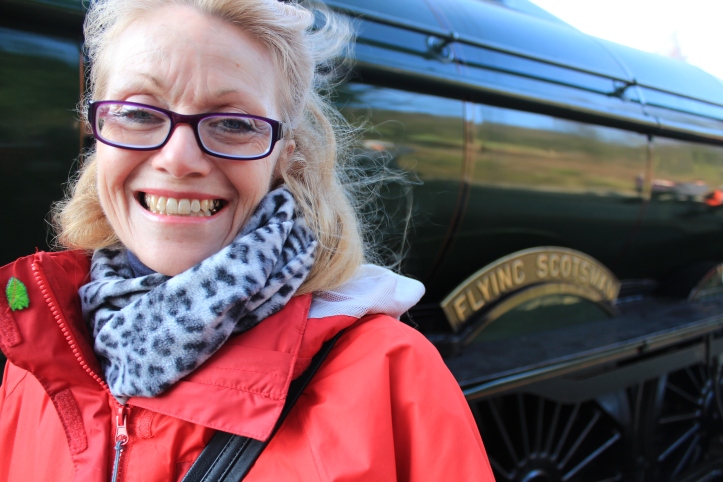